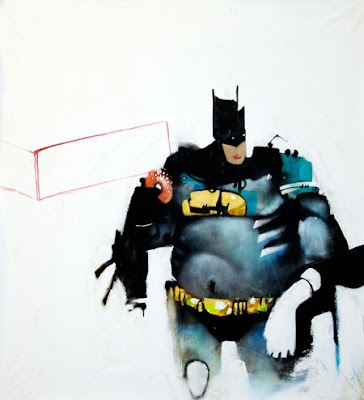 I first discovered Anthony Lister when I was reading ArtForum two years ago. His paintings really stood out to me because of the fact that he uses comic book heroes as his subject, heroes that I grew up watching on television and reading about in comics. The other thing that really caught my eye was his technique; his graffiti-like approach of painting. Lister’s sculptures also really attracted me to his work as well. Anthony Lister was bornin 1979 in Australia, got his BFA at the Queensland College of Art in Brisbanein 2001. He now lives in Brooklyn, New York with a wife and children. He is known mostly for using comic book characters as the main subject of his artwork.

The first painting I ever saw of Lister’s was this painting of Batman eating a doughnut. I immediately thought of how there are no super heroes in real life, and if there were no one is perfect and superheroes are not perfect either. In this painting Anthony Lister makes batman look like a fat slob; as some who has issues with controlling what they consume. So it seems he is trying to bring these super heroes down to a more relatable, tangible level. 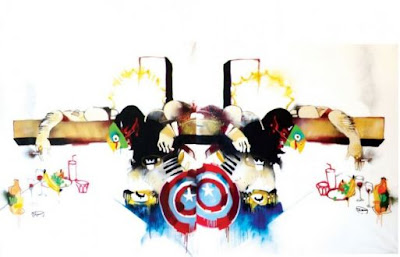 Anthony Lister also tends to combine different superheroes as if even them by them self are not worthy enough to even exist as a superhero. Again, bringing the superhero back down and making them more relatable seems to be the main message of Lister’s art works. However, even when he does that, they still sometimes seem weak and powerless to their own emotions.

When Anthony Lister talks about why he decided to use superheroes as the subject of his paintings and other works, he says it’s because most graffiti artists don’t want to be seen or ever caught for that matter and to him that is the same for most all comic book characters. All of them hide behind their masks and graffiti artist hide behind their work and their street personas. 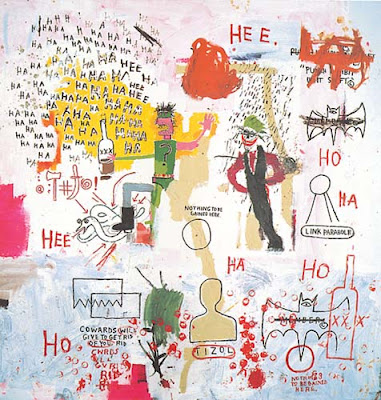 Basquiat, "Riddle Me This Batman"

Anthony Lister’s work reminds me alot of Basquiat’s artwork. They both have a very loose approach to painting. Both of them come from a street-artist background, and Lister still creates street art to this day. Basquait also used comic book heroes in this artworks like in “Riddle Me This Batman”.

Overall, I believe his work is fun,playful and humorous. The characters he creates are relatable and familiar, because of popular comic book culture and because of their actions and circumstances in the scenes Lister creates.