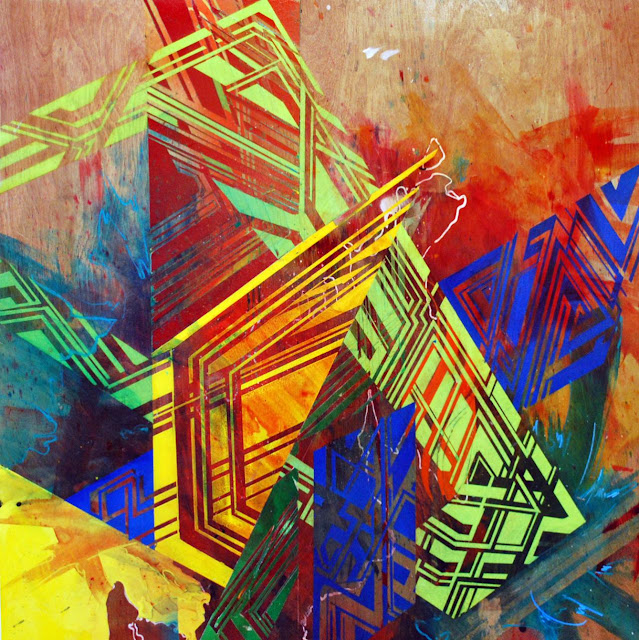 Departure was an exhibition hosted by grayDuck in Austin Texas. The exhibition lasted from January 14 - February 13, 2011; containing various forms of architecture, decomposing words, and information, all within an intuitive and spiritual imagination. Departure showcased abstract elements in ways for people to explore. Thanks to the art alliance in Austin seen here, many members and organizations help to umbrella various galleries (like grayDuck), and locations while developing a culture in an urban atmosphere for many to enjoy. Austin does this by separating their events under the names of art night austin, art city austin, or art week austin. These events are filled with art, drinks, food, and even after-parties.
I found Departure distinctive for two main reasons, one being abstraction, and the other being profound colors. The outstanding use of powerful lines like Melissa Breitenfeldt's 09_02, and Ute Bertog's Only One piece help captivate attention; Departure utilizes their chosen artists in ways that manipulate color to bring a tense and powerful impression. I believe that once my concentration had been captured it was being guided in multiple directions as the emphasis on depth and defied-physics work in place. Like buildings were being sliced and color coded on top of each other to bring a mechanical, or even digital feel to the eye. Pleasing the view as the traveling eye replaced many hard edges with a fluid motion. 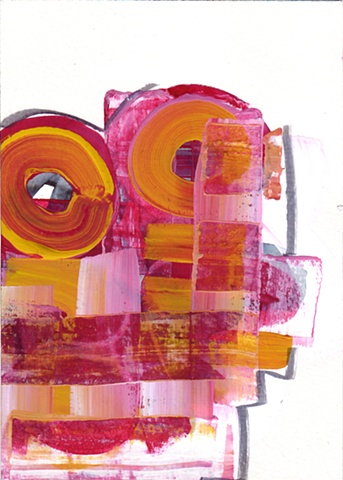 
Although Departure expresses a great deal on colorful abstractions I found it difficult to accept the integration of 3D architecture. In particular Jennifer Chenoweth's spherical abstract pieces. The 3 dimensional representations did not convince my eye. A stream of shapes and colors appear to follow each other in a respectable manner like the other art works seemed to be arranged. In realizing this I noticed how my preference in art had been morphed to accept a flow or direction, rather than an impeding or challenging route that Departure used by implementing Jennifer's art. It doesn't destroy the atmosphere but it certainly doesn't seem to correctly follow the implied direction of it's surroundings. This stuck out too much for me to pay attention to, and it didn't help with how many more of Jennifer's oil/charcoal steel pieces that accompanied. Nevertheless it would seem more appropriate if grayDuck Gallery took Jennifer Chenoweth's artwork and placed it within it's own event, or similar.

In exploring characteristics of grayDuck Gallery I did find an overall acceptance for the arranged exhibition. In doing so I learned more about Austin's artistic culture, and a number of key places to meet and experience forms of art that will not only bring attraction but hopefully push boundaries of my own. In doing so I came to realize my own appreciation and preference for artistic themes. Along with such an atmosphere it's hard to deny a great opportunity to entertain viewers, create friendships, and allow a chance to at least grab some grub along with some drinks. Regardless, if all else fails, people can at least walk out with something in the stomach.