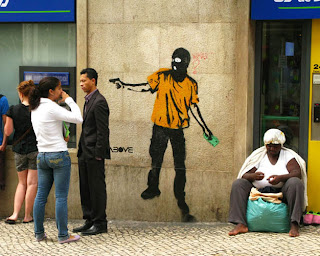 "Giving to the Poor" Lisbon, Portugal
A friend of mine once told me about Above a few years back, describing him as a “Robin Hood graffiti artist”. After looking into farther on self interest, Robin Hood could not be a better description of his work. Above is not identifiable as a person, for he keeps his identity secret. His works speak out on political wrong doings and social injustices. One stencil done by Above in Portugal shows a man holding a business man at gun point while giving money to a seemingly homeless woman. This sort of “rob from the rich and give to the poor” piece of art is exactly what makes Above’s style stick out. 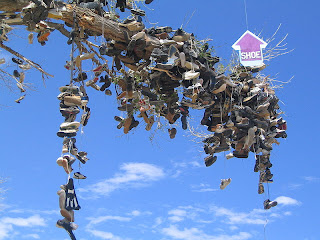 "Shoe/Tree" 2004
At the age of 19, in 2001, Above moved from California to Paris, France where he threw himself into the center of a vastly growing street art movement. Paris was home to at this time many credited street artists who all developed a new style of street art that incorporated a logo in lieu of a name as a signature. Above’s signature naturally was an arrow pointing up. 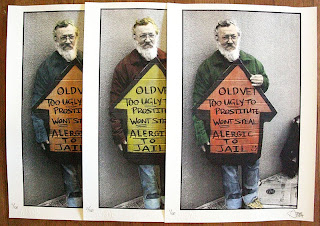 Above went on a “U.S.A. Tour” in 2004, hanging up over 300 mobiles of his art in over a dozen major cities. Naturally this brought publicity attention and when asked in an interview how he got the mobiles so high Above answered: ""I value and respect that we all have imaginations and for me to interfere with what your imagination is creating, or thinking, would be wrong”.


What makes Above’s street art different is that it is about the streets. He depicts things such as beggars, robbers, disasters and common street viewings and social errors. Above takes

Above’s art is growing as fast as the times are changing, give him new street material to revolve his work around every day. Above has accredited his parent’s love of art to inspire him, and now Above is using his love of art to inspire people all around him, giving an outcry of opinions on current issues that people pass by everyday instead of inside gallery walls.