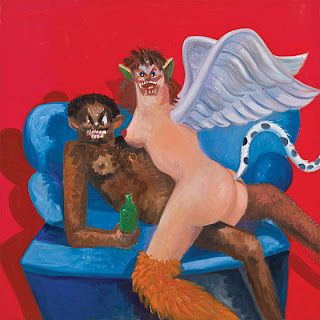 This disturbing, demonic, and hedonistic portrayal of Kanye West is what has become the trademark of a George Condo painting. A manipulated and sometimes perverse glimpse into the man's imagination, a Beautiful Dark Twisted Fantasy if you will. He is a artist who has developed a very unique and extraordinary way to explore the portraiture. As noted by a Luhreg Augustine press release in 2002, "Beginning with his clown paintings in the early 80's, Condo's investigation into this genre reflected a highly unconventional approach to portraiture based upon imagination and memory as opposed to found or appropriated source material. The imaginary portrait became, through Condo's eyes, a springboard for the development of an entirely new language of portraiture. While simultaneously drawing upon traditional techniques of oil painting, Condo imbued his subjects with a psychological complexity quite unique in the realm of the portrait."

He has developed this technique of exploring the psychological with imagination over the course of the three decades while here in America as well as Europe. Condo studied art history and music theory at the University of Massachusetts. Upon receiving his degree, he arrived in New York in 1980 where he submerged himself in the East Village art scene.Some of his early works were exhibited at at the Pat Hearn Gallery.Condo developed a unique painting style, employing the virtuoso draftsmanship and paint handling of the old masters to depict subject matter that sprang largely from his imagination. 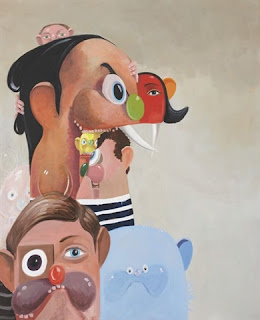 I feel as if much of his work is derived from a manipulated and disturbed imagination that is completely unique and fresh in the art world. The portraits explore and stretch the limits of what a portrait is. The subjects portrayed are often not realistic and to not depict anyone in particular. Rather a series of invented characters who offer as a vehicle for many different emotions and commentary. He uses classical techniques to create pieces containing subject matter his predecessors would never have thought to use. These are often dark, savage images with no icons spared as shown in the image below. A lewd interpretation of the crucifixion of Jesus Christ, one that is sure to shock the senses and create a debate on what is too far. But the piece executes its purpose perfectly, it evokes a strong reaction and ensuing commentary and debate.

I feel that the graphic and distorted nature of his images are what has separated him from the rest of those exploring portraiture in the contemporary. He has originated a technique that is undoubtedly his. His work is now reaching a new demographic because of his work with Kanye West. Before the unveiling of the various covers he did for West's 2010 album, I had no idea who he was. I must say the images took a while to register and process as a collective, let alone as individual pieces. All together there are 5 seprate covers for the album, each more shocking than the last. West reached out to Condo to create an image that would shock his audience. Condo did West one better and created a cover that was ultimately banned by many retailers. Much to the delight of West, being the ever controversial and polarizing figure in pop culture. This pairing of two titans of there respected medium has bridged a gap of two worlds that may have never known of each other otherwise. 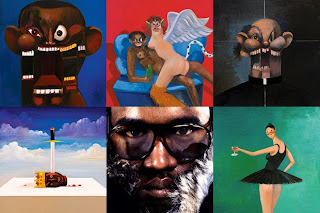 After over 30 years and a very productive and prolific career, the New Museum in New York recently displayed what Condo described as a "conceptual survey" of his body of work thus far. "George Condo: Mental States" ran from January 26, 2011 to May 8, 2011. Accompanying the exhibition is a 190 page catalogue containg commentary and visuals of his work over the last 30 years.

With such a large body of work spanning over four decades, its difficult to process the complexites and process of a George Condo portraiture. Each share a similar theme of a distorted facial structure, but each character carries so many layers of depth and emotion that one must submerge themselves in the odd world Condo creates to even begin a basic understanding of what he is trying to convey. I will continue to explore this man's work as he has quickly become one of my favorite artists. As the world continues to grow and become more of dark reality as opposed to fantasy, we must believe that Condo will be there to provide the painted interpretation of this new world. 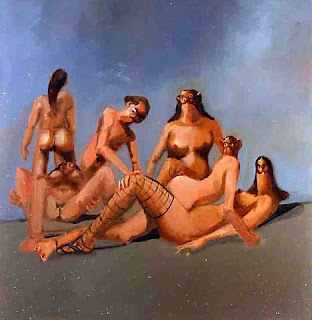