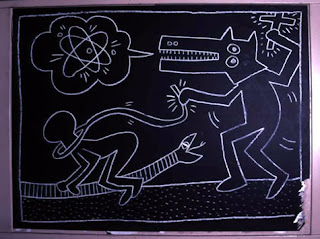 Keith Haring was an artistic social activist who had a profound impact on 20th century art. His works told stories in response to the street culture of New York City. Within the New York subway systems, Haring achieved his first public attention with chalk drawings on empty blacken advertisement boards. Soon after he would gain success in the art world and world wide recognition with his line drawings, paintings, sculptures, public projects, and his public accessible retail store, Pop Shop, in New York City. Before his death, Haring founded the Keith Haring Foundation in support of children's and AIDS-related organizations.

Haring's works are mostly composed with simple lines of characters; such as people, animals, flying saucers, flowers, and other objects. His work has been compared to those of our ancient ancestor's cave paintings, but with a modern [80's] feel to them. Within Haring's line drawings he tells stories of the New York City street life. He depicts people and some of the animals being zapped by fly saucers. People performing sex acts upon one another. There are many wild and crazy scenes of twisted characters and outrages abstracted images. More of Haring's works can be viewed at www.haring.com.

"I was always totally amazed that the people I would meet while I was doing them were really, really concerned with what they meant. The first thing anyone asked me, no matter how old, no matter who they were, was what does it mean?" 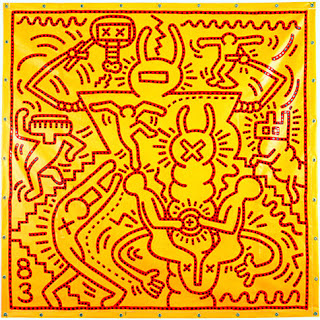 Haring created his art work in the public view. It became like a performance to him. Being viewed by the public while creating his art helped him to master his skills. He would work during the day when there were more people out and about. Working in this environment gained him more recognition in the public's eye. For he was able to reach all forms of people regardless of social status or education. This work method gave the everyday Joe and Jane the opportunity to participate in the art world by asking questions and critiquing Haring's work. The feedback from the public was another helpful tool to his craft.

"I was learning, watching people's reactions and interactions with the drawings and with me and looking at it as a phenomenon. Having this incredible feedback from people, which is one of the main things that kept me going so long, was the participation of the people that were watching me and the kinds of comments and questions and observations that were coming from every range of person you could imagine, from little kids to old ladies to art historians."

Haring's works have been seen world wide in many different solo and collaborated exhibitions. He had his first show at the Pittsburgh Arts and Crafts Center in 1976. Shows at P.S. 122 and Club 57 added to his recognition he had already gained through his subway drawings and street graffiti. Haring worked with amazing energy, and had shows in Rotterdam, Tokyo, Naples, Antwerp, London, Cologne, Milan, Basel, Munich, Bordeaux, Amsterdam, Paris and other cities, as well as numerous shows in New York and across the United States. The success of his retail store, Pop Shop, also allowed for his works to be sold to people from all forms of life. 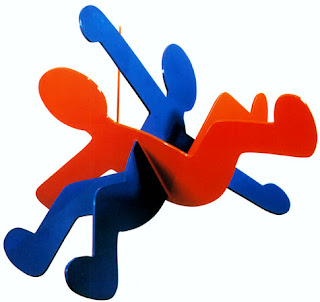 The great success and invited style of Keith Haring has propelled and influenced contemporary art in the 20th century. The simplicity of his imagery has become a universally recognized visual language that tells stories and engages the audience into the world of Keith Haring. Through his accessible retail store Haring brought his art work to the masses.  Haring's legacy has given the world a glance into the future as well as setting the tone for future inspiring artists.