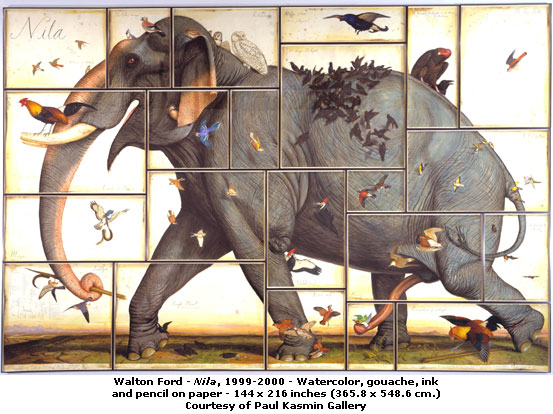 Walton Ford takes his inspiration from natural wildlife and tells a story in his works. He got his sketches from going to Akeley Hall of African Mammals at the American Museum of Natural History in New York where he is originally from. There he would draw the once live mammals, frozen in their fake natural environments poised to leap back to life at any moment. He went about his drawings not unlike John Audubon, whom he also took great fascination from and the way that he created so many animals in such an ironic manner. Walton's large scale watercolors create a blend of natural history and current events, usually with political commentary. Each animal Ford creates has a complex and unique double meaning which he hints at using clues, jokes, and illustrates lessons in colonial literature and folktales.

Ford has also done a series based around the ideas and discoveries of Sir Richard Burton. One of the paintings involved centers around a monkey banquet. The series explores Walton's fascination with Burton and one of the stories involving him and several monkeys he kept in his living quarters while serving as a British officer.


“His language studies continued unabated and his interest in the science of the spoken word led him to conduct an interesting experiment with some pet monkeys. Curious as to whether primates used some form of speech to communicate, he gathered together forty monkeys of various ages and species and installed them in his house in an attempt to compile a vocabulary of monkey language. He learned to imitate their sounds, repeating them over and over. And he believed they understood some of them. Each monkey had a name, Isabel, his wife, explained. He had his doctor, his chaplain, his secretary, his aide-de-camp, his agent, and one tiny one, very pretty, small and silky looking monkey he used to call his wife and put pearls in her ears. His great amusement was to keep a kind of refectory for them where they all sat down on chairs at mealtimes and the servants waited on them and each had its bowl and plate with the food and drink proper for them. He sat at the head of the table and the pretty little monkey sat by him in a baby’s high chair.”—That’s just too good!—“He had a list of about sixty words before the experiment was concluded, but unfortunately the results were lost in a fire in 1860 in which almost all his early papers perished.”

" As I was working on it, a little subtext crept in and I went with it—which is the painting is also an allegory of the senses. I have sight, touch, taste, smell, and sound in there as well, mixed in with the things. It seemed like the senses come to play in this sort of colonial experiment too." -Ford


Walton Ford strives to put together a mini history of colonialism. He does quite extensive research when forming his ideas and has a personal attachment to it as well not only from interest but a family history of southern slave owners as well. He approaches that family background and creates images in a less direct fashion to tell their story.