TREND | The Art of Smelling 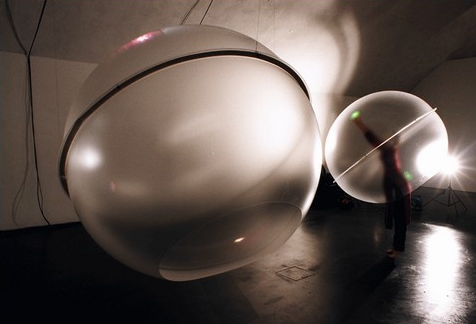 Hilda Kozari, AIR, Smell of Cities, acrylic bubbles where different scents being pumped into the bubble, 2010

Walking into a kitchen where dinner is being prepared, usually one of the first senses to detect the cooking is the sense of smell. Smelling something, an odor, scent, aroma, and fragrance are not usually associated with painting, acrylic bubbles, or watching a performance. But put those words with art and what have you got? Well, art and smelling. The sense of smell is one of the least explored avenues artists try to explore when creating a piece of art. Hilda Kozari, Sissel Tolaas, and Koo Jeong A are three contemporary artists that have explored and exhibited the art of smelling.

The sense of smell is very closely related to memories, moods, and places. It has been studied for hundreds of years. Explored very little by artists because generally a work of art whether sculptural, painted, or digital is almost always visual and tactile. But with some of Hilda Kozari’s works she tries to connect memories and places with specific odors and scents. Her instillation, that was at the Kiasma Contemporary Art Museum in Finland, called AIR, Smell of Cities explores her past through scents. In a bare room three acrylic bubbles seem to float and are lit with light stands. There is an opening at the bottom of the bubbles; the smeller is intended to enter into the balloon. There are faint images that appear to flash across the bubble and the scent of a specific city, created by Bertrand Duchaufour, is pumped into the bubble. Each bubble represents a city from Kozari’s past. They are: Paris, France; Budapest, Hungary; and Helsinki, Finland. She uses the sense of smell to take people through her memories. Kozari doesn’t visually show her memories with paintings or sculpture but through the sense of smell. 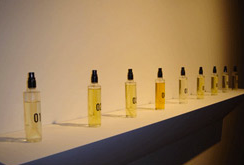 While Kozari is exploring scents and memories, Sissel Tolaas is exploring scent through emotions. Tolaas is both an artist and a scientist. Having a graduate degree in chemistry, art and language, she studies all scents good and bad. She also has over 6,700 scents ranging from sour milk to strawberries. Tolaas showed work at the List Visual Arts Center at MIT in 2006 at the exhibit called Sensorium Part 1. Her part of the show was called The Smell of Fear, where she showcases nine scents that are from men who suffer from intense and chronic fear. Each of the nine scents receives it’s own wall. Tolaas then created a gloss paint that releases its scent when gently touched. Smellers are encouraged to scratch, touch and smell the wall. Tolaas has the art of smell down to a science. 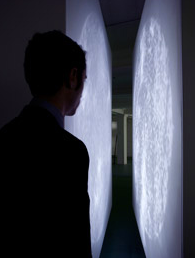 Another artist who is exploring smell is Koo Jeong A. Working with perfumer Bruno Jovanovich, Jeong A created an exhibit at the Dia Art Foundation at the Hispanic Society of America, New York. The show was called Constellation Congress and one specific piece, called Before the Rain, explores the atmosphere of a dry city on the verge of an enormous rainstorm. As quoted in ARTnews Jovanovich "was compelled to create a scent that evokes the almost violent atmospheric tension that exists before a thunderous rainstorm." Jeong A wanted to create a scent that was a collection of the steamy air of different cities.

Artists can create scents to bring back memories, evoke new memories, and to explore the idea of a scent. Today the sense of smell is being considered more. A symposium was held at the auditorium in Parsons: The New School for Design where smellers were asked to consider scent as part of design. Federico Díaz held an exhibit that uses brain waves and to create the smellers personal scent. Scented paint for houses has been created to help sell homes. In the Old State House Museum in Boston Massachusetts historical city scents were created. The sense of smell play a major role in peoples lives and now in the exhibits of many artists.