Trend | Public Art | Please Do Not Climb on Sculpture 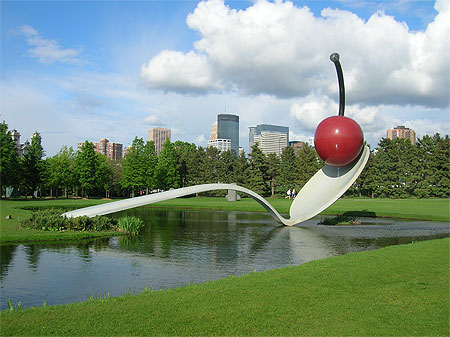 Whether it is a memorial, a cause, an advertisement, or just personal enjoyment, larger than life sculptures are a worldwide trend coming to an urban city near you. These enormous pieces of art are a lot to look at and sometimes a lot to take in. It kind of makes you wonder "why so big?" or maybe even "what's the point?" Don't read too much into the complexity or scale of the structure but rather the simple, not so serious, kind of make you smile factor.

Not many artists can pull off a giant spoon posing as a bridge with a cherry on top that also acts as a fountain. Well, that's not the case with Claes Oldenberg and wife Coosje van Bruggen. This couple has produced many large scale sculptures across the globe but Spoonbridge and Cherry is their first fountain sculpture. The enormous spoon stretches 52 feet across a small pond with an aluminum cherry squirting out water from its stem and into the pool below. In the winter months the pond freezes over with layers of snow covering the ground and making the sculpture look like it's in a bowl of  ice cream. Oldenbergs Spoonbridge and Cherry is the Twin Cities' most famous and most photographed landmark.

Imagine waking up and seeing a gigantic bundle of sunny side up eggs on your street. Dutch based artist Henk Hofstra made his dream into a creative design on the streets of Leeuwarden, Holland. Hofstra is clearly inspired by his breakfast. He conducting a series of giant friend eggs, some of which are 100 feet wide. He called it "Art Eggcident." This Controversial Dutch artist likes to attack large environmental and social issues with his public art. Hofstas hot off the stove project is his way of addressing global warming. 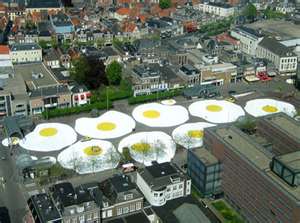 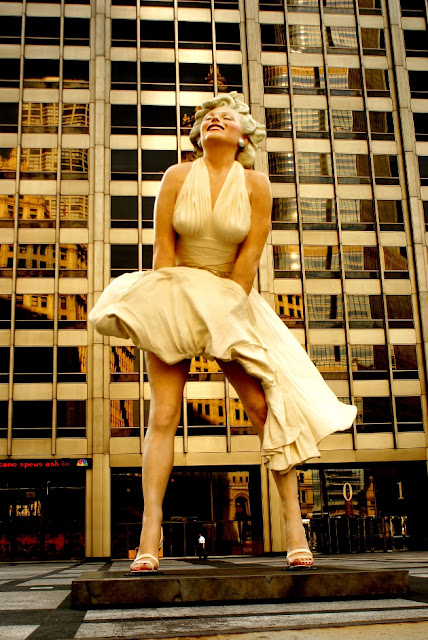 They don't call it the windy city for nothing. This 26 foot, 34,000 pound sculpture of Marilyn Monroe's famous pose from the movie "The Seven Year Itch" was finally revealed in July of 2011. Creator 81 year old Seward Johnson is the founder of Grounds for Sculpture. A 35 acre park in Hamilton, New Jersey which featuring works by other not only himself but other contemporary sculptors. Johnson who is trying to recreate one of the most famed moments in film history is now being viewed as the number one Virtual Tourist Top ten list of worst public art. There has been an abundance amount of Chicagoans who don't feel like Seward Johnson's sculpture is really that appropriate to be on display in the heart of dowtown. Viewers say that she definitely starts a conversation; others say that her dress should be down and not exposing her white lace panties. Sadly for those who admire the statue, Marilyn is scheduled to be moved in the spring of 2012.

Have you ever had an encounter with a big yellow rabbit? Dutch artist Florentijn Hofman and the citizens of Orebro, Sweden sure have. The 50 foot tall and 30 foot long Big Yellow Rabbit was constructed out of locally manufactured shingles and wooden armature; resembling a floppy, fluffy rabbit. The "Big Yellow Rabbit" was created for the month long annual Openart Biennial festival in the cities Town Square. 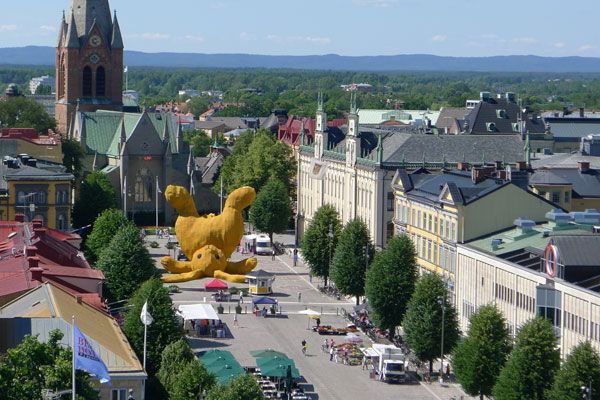 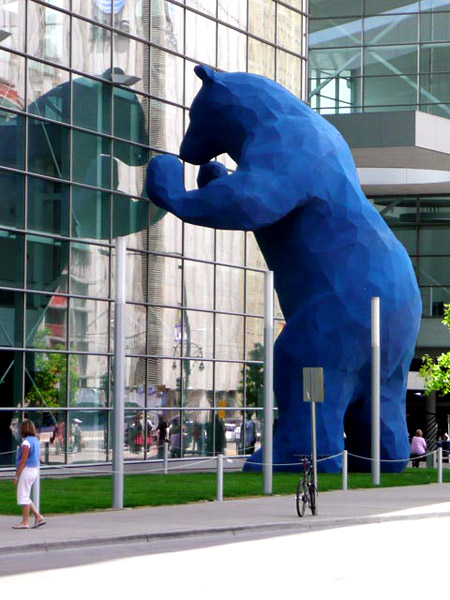 Lawrence Agent, I See What You Mean, Denver, Colorado, 2005

This gigantic blue bear spends most of his time looking through the window of the Colorado Convention Center. I See What You Mean also called the blue bear was created by Denver artist Lawrence Argent. The bears massive measurements include a height of 40 feet, a 22 foot arm span, and the weight of 10 cows. The giant blue bear was constructed out of molded fiberglass with a blue cement like coating. Miniature 12- 16 inch  I See What You Mean souvenir bears have been fabricated and sold. The big blue bear is now one of the most cared for icons (excluding John Elway) in the Denver City Limits. 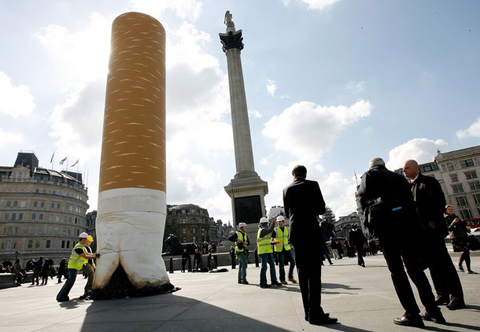 Part of a no loitering campaign Keep Britain Tidy workers dropped a huge... cigarette on the smokers who put their butts out on the streets. Emphasizing the fact that cigarette related littering affects 78 percent of the streets in the United Kingdom. The humongous butt is 30 feet tall and supposed to act as the number of butts dropped on the city streets throughout the whole country. Illustrating a problem that is striking the nation. Last July smoking in public places was banned in the U.K. Since then the number of cigarette butts disposed of on the streets has increased excessively.

These are just a few of the huge large scaled sculptures that are being displayed in our environment and the world around us. No matter how random the statues might be and how much they might not flow with the history of the city they are placed in,  I still consider them a work of art. I leave you with the true definition of art: product or process of deliberately arranging items in a way that influences and affects, one or more of the senses, emotions, and intellect.

I have an aversion to large scale public art such as you have presented in your blog. In trying to figure out where my aversion comes from, I realize that it is not the size that matters. One of my favorite artists, Magdalena Abakanowicz, has produced enormous sculptures in her life. Yet her artwork always feels, to me, like it is personal work...to read about her background and then see her sculptures gives reason to why she works with such large scale: such large feelings translate well into large sculpture (she's a WWII Warsaw survivor). Some of these large scale sculptures by artists you've presented are uninteresting and gaudy objects. They also seem to work as tourist attractions...more meant for selling memorabilia than art for arts sake.
This might not be true with some of the more socially progressive works, such as the giant cigarette butt, but this trend generally seems to have business interests in mind.

I have to say I love large scale art and all the fruity ideas people seem to come up with, which I think you did a good job of showing here. I really enjoy the one's with meaning though more so, like the giant cigarette butt.

I love the fact how henk hofsta using the eggs for Global warming. Showing that our world is getting warmer and we are the cause for that. Also every sculpture has meaning to way they put the giant sculpture in the world. You showed great details of each in every giant sculpture.