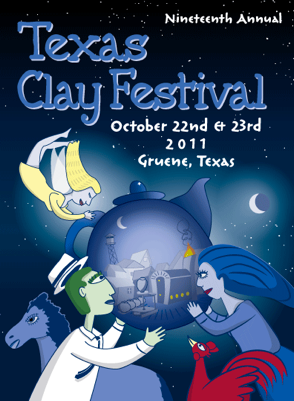 A few years ago I attempted to take a course in ceramics; this only lasted a few weeks before I decided to drop it. Personally I could not see my active hands working in such a steady media, but I did not lose my interest in ceramics. I gained a greater understanding for the expressive art coupled with the sound working pace of ceramists and despite my own failed attempt in this media, I find myself looking forward to the Texas Clay Festival each year since.


Texas Clay festival is held each year in the town of Gruene,Texas. The layout of this festival within Gruene is so inviting, with live music filling the air from the dance hall and the low hum of the river surrounding tents filled with the ceramic artworks of my fellow Texan artists.

Walking straight from the general store, the first tent I walked into was that of a very friendly Fraser Harris. I was drawn to his  terracotta works. These spheres with lively expressions and detail sculpted into them that are also sound activated, with what sounds like small pieces of clay within the sphere. Each sphere is unique in sound and surface with personalities parallel to Harris’ own.

Harris was raised in Thailand outside of Bangkok, where he first found an interest in clay when he accidentally discovered that wet clay will burst when heated. He discovered this by sneaking into a cooks charcoal fire, resulting in clay shards in the cooks rice. How pleased we are that this happy accident would eventually lead him here to Central Texas.


Next I spotted Carl Block, who I had the good fortune of meeting at last year’s festival. Carl Block’s active work transcends his laid back personality.  These bold colors mirror the wacky faces and designs he puts into the jugs.

Having spent many a vacation in New Mexico growing up and having a love for the folk practice of southern face jugs, Block has taken his own exciting designs and moved beyond the traditional terracotta southern face jugs. Block's face jugs are what have drawn me into his work for the past two years.

Following a demo on Raku firing, I was immediately drawn into the tent of JoLea Arcidiacono. An artist i knew i was looking for but had not yet been introduced to the work.

I was so excited to see the variations in Arcidiacono's work, from the designs to the glazing and finishes. Some figurative, some traditional, but most highly abstract.

The figure above pulled me in purely by design. The proportions of the figure are fantastic and I have a fascination with anything aquatic. As i got closer i noticed this was not a glaze i had see before. I asked Arcidiacono what had been used to treat the surface, and found that the surface had been painted with encaustic. A fine matte finish and texture for this imagery.

I finished there, and left that day glad to see the familiar and glad to have some new inspirations. It was another fine day in Gruene, TX and another great year at the Texas Clay Festival.