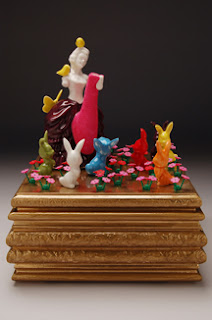 For my review I wanted to see something fun, catchy, and uplifting in complete contrast to the day; which looked on the verge of raining the whole afternoon. The day before I had viewed El Anatsui at the Blanton Museum of Art , but I was temporarily turned off by the art world. Anatsui had on display the most monumental pieces I've ever paid for, mainly large handmade tapestries; resembling bamboo carpeting, stitched together with wiring and hundreds of plastic alcohol rapers. However, by the time I got to the Blanton there were more guards than visitors, and even though I studied all the writing posted along the gallery walls I couldn't help but still feel detached from the exhibition.
Luckily, I found a new venue; the JoanGrona studio among the Blue Star Art Complex on the edge of downtown San Antonio, and a new artist (to me) Wesley Harvey. However, upon arrival to the gallery I noticed the exhibition had been shoved to the back and had already lost (sold) pieces including the one featured below that I had come to see. Though Afternoon Delight was listed as “current” online, it was in the process of being switched out. However, the bulk of the exhibition was still waiting along a wall in the second half of the gallery. 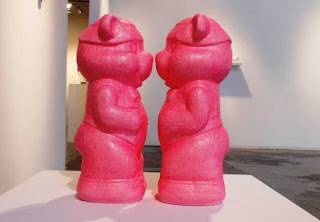 So I continued, and can safely say Harvey loves kitsch; producing work very similar to Touko “Tom ofFinland” Laaksonen's fetish style. His work robs the innocence from the ceramic figurines by depicting them within scenes of buggery. The content usually revolves around an almost crude sense of sexual humor, as he attempts to tell his own narratives through the manipulation of junk store relics.

Something I hadn't noticed till I viewed his work in person was the use of “rayon fibers” on certain sections of the figurines. The fibers create a flat felt like aesthetic that directly opposes the smooth glimmer of the ceramic. From the use of this in Teapot Trickle Fantasy (at the top) it seems he is attempting to depict the separation or combination of his own feminine and masculine qualities. 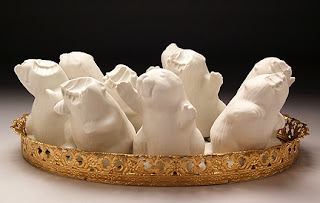 By far, my favorite part of the whole exhibition was the gallery itself; in comparison it was a closet to the Blanton, but this seemed to favor Harvey's work. The room was only occupied only by me, my company, the attendant was in the front room out of sight and mind. The complete freedom to explore and bottle of wine left for us made the room that much more intimate, and the art more accessible.
This is mainly what I felt Anatusi's exhibition lacked: unity. There were about five of his tapestries I had mentioned earlier strewn about the first floor with other his works (sculptures and painting) filed in between. I would have much rather seen the all the sheets along the large back wall; with minimal space between for the statements of each, to further the feeling of a grander suffering. Harvey's presentation was just the opposite. Not only did it fit on one wall, but had room to spare. Though this is purely due to how amazingly small each sculpture is, it still allowed me to relate each figurine in comparison to the whole of the remaining exhibition.

Most importantly, I was able to make the space at the Grona my own; it was still and echo-less, which allowed me to imagine his work in the context of my own home. Nor did the Grona apply 20 cents of painters tape to mark of the space around a composition, supposedly worth a quarter to half million each. Thinking about it now, I could have picked up a piece and left the Grona for all they knew, and to me it made Harvey's work tangible and left me free to view the work in any and all angles. I had a problem with this specifically at the Blanton where they put two of Anatsui's multiple compositions in different corners of the room, and another one along the wall. It seemed me that the audience was ironically doomed to a half the story of works that were actually narrative based.

Overall I enjoyed Wesely Harvey's Afternoon Delight the most. The Grona provided an experience I actually felt a part of and witness to something few may have seen. Where as at the Blanton, I felt guided though the exhibition, then into the exhibition store, to be guided out the door and on my way, or upstairs to repeat the process. Though in my mind ,When I last Wrote to You About Africa proves how powerful and monumental El Anatsui's work can be, it just wasn't enjoyable to view his art while while knowingly being viewed myself.
-Tyler Robarge
at 9:00 AM