Blink, the power of thinking without thinking.  Malcolm Gladwell is a journalist who writes more about social phenomenon than fine arts.  However, in this book, Gladwell describes how first impressions affect our decisions, and how meaningful gut instincts really are.  Contemporary art can easily be dismissed in just a glance, especially if a budding artist hasn't yet earned the clout to merit deeper examinations.  The first glance of an artist's work can make it or break it.  So, how important is it that we pay closer attention to what viewers are seeing in the first two seconds?


In the introduction to Blink, "The Statue that Didn't Look Right", Gladwell describes a situation where the Getty museum in California makes a costly decision.  They bought a Kouros statue for ten million dollars.  It passed the scrutinizing eyes of many art experts, however, shortly after the piece was purchased, Evelyn Harrison, one of the world's top experts on Greek art, smelled a rat.  The instant she saw the statue, she knew it was a fraud.  However, it was not for any reason that she could describe.  Careful investigations revealed that indeed, she was right.  Her instinct had been correct, despite mounds of physical evidence that had supported the statue's integrity.  This was a moment when a gut feeling and an intitial reaction had rung true.

What does this have to do with contemporary art?  Well, artists need to be seen.  They spend endless hours working on their masterpieces, hoping to reach their audience and strike a chord.  People need to be able to identify with an artist's work in the instant that they see it, otherwise, it may never truly be seen. 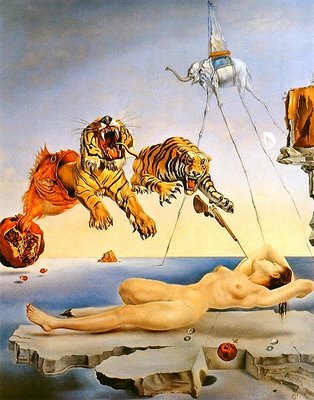 So what's an artist to do?  Part of what has made painters like Georgia O'Keefe, Salvador Dali, Lucien Frued, and Andy Warhol so fantastic is their ability to attract the veiwer's interest instantly.  Composition, color, subject, and unique style are all components that give paintings the ability to "catch" someone's eye.  They inherently stand out from the crowd.  Upon first glance, these paintings call the viewer in for closer inspection and more studious appreciation.  Gladwell simply provides evidence that the initial sight of a work of art is of great importance.

Consideration must therefor be given from the very begining of an artist's work to the basic appearance of the piece.  The tiny details come later.  When an aspiring artist is looking to attract attention, they must create works that are immediatly appealing.  It doesnt have to be beautiful, it just has to inspire a curiosity for a closer look.

-Morgan Adams Middleton
at 9:00 AM