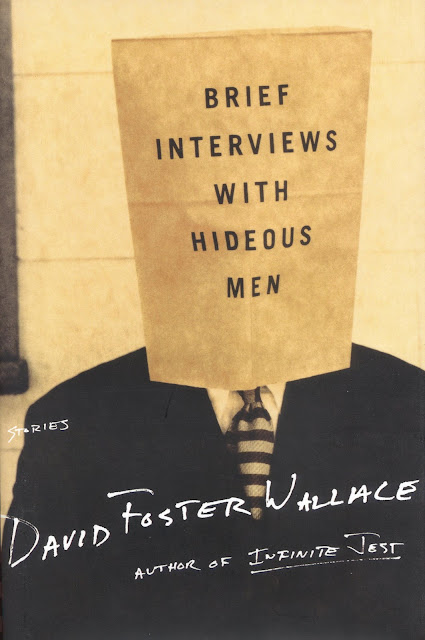 Two weeks ago, I was in a discussion with an artist friend about what post-post modernism means, and who it can serve. How socially useful is the self reflective, and how do contemporary artists address ideas in and outside of the art world at the same time? She recommended a book by David Foster Wallace, Brief Interviews With Hideous Men.

I want to start with the chapter Octet, which is stuck in the center of the book. Trapped in his own failures to make this chapter work, Wallace laments about the horrors of writing in a time when everything seems to have been done. He steps out of his lofty position as the writer and asks the reader, if he should dare to ask, if the chapter they are reading is a good idea. He questions what the chapter can serve beyond ideas like "look at me looking at you looking at…" The resulting effect is that the reader will retro-actively take into account that the first half of the novel is a comment both on the social issues addressed in the stories, as well as on fiction writing itself.  Wallace attempts to marry ideas about post-modern fiction and its  artistic purpose with that of the everyday world.


Josephine Meckseper is a photographer and sculptor. Her work stems from the idea that conflicting points of view have leveled artistic statements down to a "food for thought" kind of experience. Her photographs address this problem both by offering reflections on the current political landscape, while placing them out of time or context. Meckseper addresses the fact that ideas today are consumed in the same way as are the commodity objects in her photographs.


Wanda Raimundi-Ortiz is a 35 yr. old video and performance artist. Her performances "Ask Chuleta" attempt to bridge the gap between the art world and her community. In Topic 1, Contemporary Art, Chuleta attempts to describe the vocabulary of post-post identity politics: "it's post identity politics, but it's a little bit different because people have already seen that other stuff.  It's identity art, but you got it flipped-again." There is a connection here between Raimundi-Ortiz's description of the post-post modern art world with her community, and David Foster Wallace's final interview in the novel. Issues of gender and sexuality meet meta-fiction in Interview #20.

Interview #20 is one man's account of a post coital conversation had with a woman he refer's to as a "real granola cruncher". Unnamed, and described as looking like a "really sexy duck", this woman explains her encounter with her roadside rape and near death experience. The man's initial response to this person is one of disgust. He finds her ideas outdated and fluffy, and her vocabulary "canned and gooey". He later confesses his actual response to the woman: "And she wasn't melodramatic about it, but she described herself as being literally paralyzed with fear". The man admits his hesitation at her use of language, while at the same time, being "gripped with fear" is a true and plausible description of her circumstance. He talks about listening to her with rapt attention: "It wasn't suspense". Here, Wallace has resurrected out dated language and cliche story lines. He dealt with the problems of post-modernism in a smart, and very beautiful way.