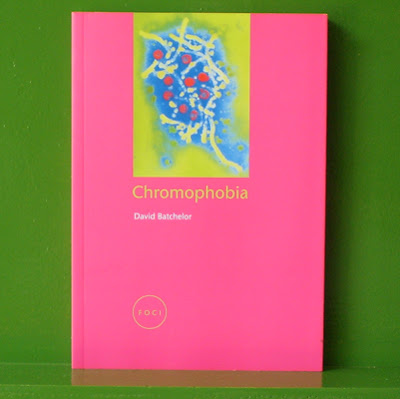 I am a color snob. I will own up to it. So, when I first came across David Batchelor’s book Chromophobia, complete disgust came over me as I took in the front cover. A small book, its cover is neon pink with lime green text, and a delightful microscope photo of some brightly colored biology. It just screams annoying. That was precisely Batchelor’s point. Thankfully, his writing was not as annoying as the front cover color choices.


Chromophobia is Batchelor’s term for Western culture’s aversion to color in art, architecture and literature. A phobia is typically described as a strong, sometimes irrational, dislike of something. He explains that there are two main ways that Western culture de-saturates itself:

In the first, colour is made out to be the property of some ‘foreign’ body - usually the feminine, the oriental, the primitive, the infantile, the vulgar, the queer or the pathological. In the second, colour is relegated to the realm of the superficial, the supplementary, the inessential or the cosmetic.

His theory made me seriously look at why I disliked the front cover so much. Did I not like it because the colors were unnecessarily bright? Because I saw them as immature?

Throughout the book, he tediously traces this phobia’s roots back to the very beginning of philosophical thinking. He gets all the way back to Plato, who once said that a painter was just “a grinder and mixer of multi-colored drugs.” Plato had a lot of confusing things to say, but this, this I understand perfectly. He was saying that artists were JUST mixing colors. Plato, they were not just doing anything. Colors allow artists to express emotions and bring things to life. An artist can’t really paint an emotion like joy with black and white. Batchelor points this prejudice out time and time again in this book.

In the first chapter of Chromophobia, aptly named ‘Whitescapes’, he goes to a party at an art collector’s house. Ironically, artists seem to be the most stuck up about color in this book, even though they are the ones who most often employ color. He said the collector’s house was big, white and white. There was a lot of white and it was everywhere. He argues that white has been deemed the “pure” color and Western culture uses it to seem “put together.” Are the contemporary art museums of today not completely painted white? Batchelor traces this cultural belief back to the Bible. Although the Bible talks about color many times, Batchelor uses Isaiah 1:18 from the NIV translation:

“Come now, let us settle the matter,”
says the LORD.
“Though your sins are like scarlet,
they shall be as white as snow;
though they are red as crimson,
they shall be like wool.”

White is good. Red is bad. The idea of color use is often deemed frivolous or even sinful. The Bible is not the only piece of literature emphasizing this belief. Batchelor uses quotes from Melville, Le Corbusier and Huxley to demonstrate the power of white in Western art.

This is a devastatingly beautifully written book. It saddened my heart that all of the wonderful literature pieces included in the book were more or less against the use of color. Batchelor has packed a lot of information on color use in the past 200 years into 111 pages, so every page is a big bite. Every chapter has great arguments, and made me examine why I view certain colors the way I do.