Bill Owens is one of the most influential photographers of the 20th century. There are, and were many people who made a name for themselves by shooting city life and metropolitan scenery, but Owens is one of the only to have captured such an accurate look at the suburban lifestyle in the early to mid nineteen seventies.  He is also accredited with single handedly defining the "American Dream" in his photos.  His book Suburbia was first published in the late seventies and later republished in 1999 and is a collection of what would turn out to be his most famous photographs.
Owens had a specific plan when he began to shoot this series of photos. It was to simply move to the suburbs and immerse himself and his family in the local culture.  It seemed to be important that he get the photos from an insiders prospective rather than from one of a stranger. So involving himself with the neighborhood was quite important.  The overall lay out of the content in the book is rather simple. Not much text at all but rather a large array of photos.  Every photo is unnamed but is attached to a quote taken from the subject of the photo. This creates a very interesting allure to the content of the book.  There is a very unusual connection to the time and place that is magnified by the quote of each subject.
An interesting aspect about Owens photos is the way they have stood the test of time.  All of the shots were taken in the seventies trying to capture the suburban american dream and they all seem to speak true to present day as well.  There seems to be a recurring theme in the objects he chooses to surround his subjects in.  Everything seems to revolve around material wealth.  In the book, there is shot after shot of families posed in front of their cookie cutter houses along side their trailer homes, boats, sports cars and motorcycles.  This is something that still reads true in todays suburban communities.  What is apparent is the book that may differ from today is the lack of cultural diversity. Which is most likely explained by time period of the seventies. 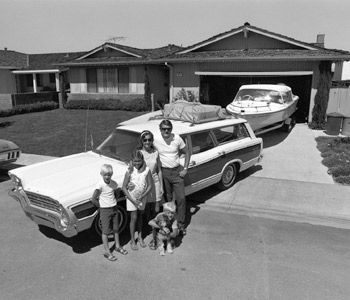 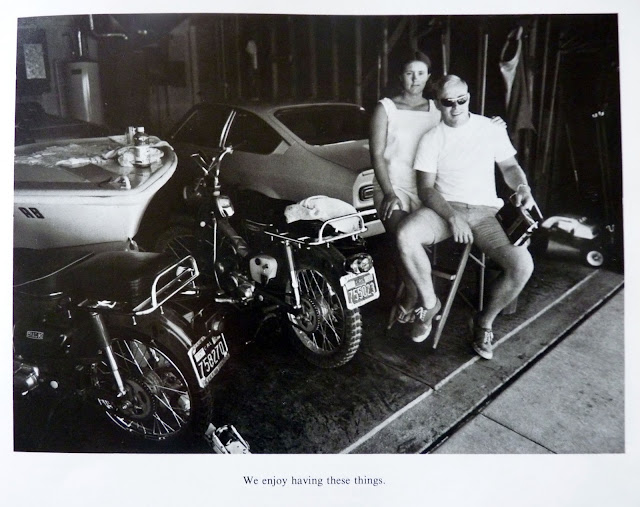 The photo above is packed with information and when coupled with the quote at the bottom speaks loud and clear.  The book is riddled with photos that follow the same basic idea of the one above.  People were and are completely content to live in these removed neighborhoods where they can gain in material wealth and "enjoy their things".  Suburbia was published in the late seventies only to be brought back in the late nineties due to the cultural relevance and astounding similarities to modern day suburban situations.
The large question posed by a book like Suburbia is why people have chosen to live their lives this way.  It is a snap shot of more than just a time but more so a shot of a way of life. A lifestyle that has not changed one bit aside from the small changes in economy.  The suburban life style seems to be the perfect way to raise a family and has come to be the cradle of the "American Dream".