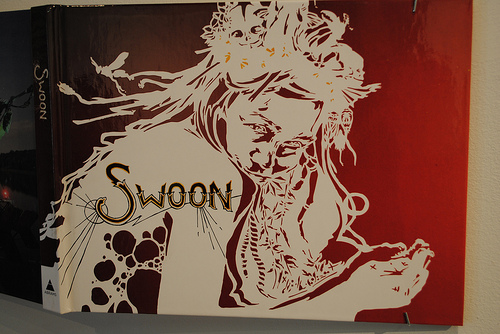 Swoon is easily one of the most interesting street artists to emerge during the last ten years. She may lack the mystery of someone like Banksy or the mainstream notoriety of a Shepard Fairey, but her work is so strikingly human that it speaks to the soul. From her wheat pasted figures that have graced walls worldwide to a floating armada of hand made rafts, SWOON is a stunning look back at her first decade of art.

The most humanizing factor of Swoon's street art subjects are their eyes. When you look into their eyes, its as if you can see into theirs souls. They are so eerily real that its as if the artist left a bit of her life with the figure. And in the unique way that Swoon is described by people in the book makes me believe that she did. The book consists of hundreds of pictures depicting her art pieces and nautical adventures and is accompanied with a series of essays/anecdotes written by artists and friends who have worked with her. Everyone in the book speaks of Swoon with such reverence and respect, but also with such love, as if she were a close family member. During his reflections, fellow artist Jeff Stark makes a great distinction that illustrates this love,

Swoon is the person who sleeps two hours at a time and prints in the middle of the night in bare feet. She is tall tales and Internet chatter. Hr name came out of a dream. We call her Callie because we love her. Swoon belongs to everyone. Callie is for us.

Considering the connection that she makes with people, it is no surprise that she works with such a large community. Rollo Romig recalls his all night antics with the Toyshop Collective (such as replacing subway ads with art), a group whose membership was "open and fluid" as long as someone could "devote endless hours to making impermanent things and not be afraid of looking ridiculous". The Toyshop Collective (only named for grant purposes) thrived in bringing together people; in 2003 they staged a pirate takeover of Staten Island that drew hundreds of swashbucklers. Throughout the book it is apparent that Swoon is someone that brings people together; a gatherer of souls.


Swoon lends one story to the book under her birth name of Caledonia Curry. She recounts the roots of Miss Rockaway Armada, a project which involved a community (of builders, artists, musicians and more) floating down the Mississippi River on rafts made from trash. Disillusioned with the war in Iraq, Curry wanted to create "an example of another way to live. One that floated and moved," and that's just what she did. The six-raft armada floated downstream, docking in the hearts and minds of everyone they met. Swoon describes the magic,


The beauty was unimaginable...The way that in every town someone called the cops, and someone brought us dinner, and someone said we had changed their lives. Someone offered their daughter, and someone made sure their daughter got nowhere near us...We lost sight of half the ideals we left with and unearthed all sorts of values we weren't expecting to find in the beautiful, old Midwest.

Swoon is a wonderful look at an artist told from both her perspective and that of her true peers, rather that some curator or art historian. Rather than spend endless pages over-analyzing pieces of art for message or subtext, this book presents stories that give a true insight as to both the artist and the person.