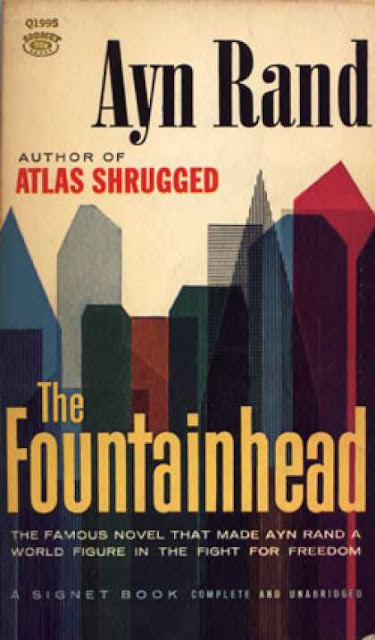 I would like to preface this post with the disclaimer that I am not personally a devout follower of Rand or her philosophical views, however I would like to correlate this particular philosophical novel with my perceptions of society today particularly within the circles and protocol of the wonderful world of high art.
This novel is more than the story of a young architect shunned by a society obsessed with the aesthetic of the antiquated past but more a metaphor pertinent to an extent even today over 60 years after it’s original publishing date.

The protagonist of the story, young Howard Roark, stoic and self-controlled, is expelled from architecture academy for being against convention, for being unique and too much a visionary for his own good, while his peer and eventual adversary graduates top of his class and embarks on a successful path as a renowned architect.
While the gifted Roark struggles in his architectural career, Peter Keating climbs the corporate ladder utilizing deceit and cutthroat tactics on the fast track to fame and fortune eventually becoming a partner in the most prestigious architecture firm in New York.
The moral of the story and what relates to society today in my opinion, is the stark reality that plagues individualists today—having to obey the established rules of the game and following particular protocol as the adversary one must overcome in order to gain a degree of success and the rarity of a successful career if attempted to achieve it otherwise. The world of Roark and Keating is essentially the same world today. While somewhat progressed in aesthetic and tolerance for the avant-garde the game is essentially the same. The characters and the people of influence are the same as are the institutions that make or break a career.
In relation to the art world, much progress has been made in matters of esthetics, however the prominence of institutions, collectors, gallerists and business savvy artists alike, directly correlate to the adversaries that Roark faces in the novel, the architecture academy, the associations, the up and coming superstars, the elite clients and the influence of convention in general. Of course, much like in the novel there are the few and far between clients or authoritarians, willing to take a chance on something different, who find a certain charm or mystique in the otherness of a someone different, someone who thinks differently, more purely, viscerally and perhaps  with a  tinge of naivety.
Roark represents the starving artist type relentless in upholding personal integrity at the expense of enduring frustration and poverty not seeking to create art based on trend and acceptance but who will follow his own instinct and relentlessly attempt to achieve acclaim by taking a different approach and will command his sinking ship to the very end.  Such an individual will maintain an indifference towards the progress of others around them as a defense against insecurity and out of defiance against the concept of the way things are. While this stance is in effect a beautiful notion, the mentality is an idealistic one with no guarantee for some great reward in the end.  It is, paradoxical in a sense, for one to uphold such a state of mind, such a state of integrity and what ultimately gets lost in such a struggle is the motive. For someone like Roark, defiantly indifferent, defiantly against the grain, what exactly is the goal? If personal integrity is at stake, what then is the desired achievement? For someone who despises critical acclaim, who is disinterested in conventional success, monetary gain and critical acclaim, being the rubric for measuring success, what then, other than upholding personal integrity could there be as a reward? There is no mention in the novel of the hero wanting to change the world, no mention necessarily of wanting to change perception or wanting to change the attitudes and esthetics, however one must conclude that achieving acceptance, not tolerance, not an exception, but a true holistic acceptance of someone different of different ideas, different ways of seeing the world and for society to see eye to eye with such visionaries and understand as they understand is understood as the ultimate, if not impossibly idealistic, achievement.
What Rand realizes as an author and later as a philosopher, is the egotistical frustration of this yearning for change in understanding.  The creator of the philosophical ideals of Objectivism, basically relates to the premise of The Fountainhead, the course of actions for one who seeks individualism as a mode of thinking to overcome the obstacles of fitting in within a society that does not permit or is threatened by the inclinations of someone against established ideals, a society of metaphorical lemmings concerned primarily with convention at the expense of personal growth, personal thought or personal gain. Rand subscribes to this concept of egoism, which acts as the impetus for intention, a concept often confused with the popular perception of selfishness, that is not so much a “me first” mentality, but more of a "consider what I want first" mentality. Though many of Rand’s concepts regarding the rejection of collective altruism and her condoning of laissez-faire capitalism may sound like conservative and outmoded views, which of course I am not completely sold on, what has really resonated in me is this particular brand of selfishness, of paving your own way for better or for worse and discovering an inherent immunity to the trials and tribulations of conventional living. I believe as a trend in contemporary art that many acclaimed artists have done exactly that in regards to moving up the elitist ranks of the art world and by showcasing what makes them unique, celebrating individualism and maintaining a degree of self-respect and originality when presenting their works and thus presenting themselves viscerally as well as self-assuredly.