If anyone is a follower of current fashion trends, they are familiar with the explosion of native American tribal designs reaching retail stores and runways worldwide. It is hard not to find a retailer now that is not a source of moccasins, feather earrings, and other “native American” prints on shirts, sweaters, towels, and even undergarments. Until recently, Urban Outfitters, one of the largest well known retail stores for hip and trendy customers, used the name “Navajo” for part of their clothing line. The Navajo Nation’s government, very upset and offended, sent a letter to Urban Outfitters for trademark infringement. While the retailer responded immediately by using a different name for that particular line, other companies are still taking advantage of this sensitive subject. Urban Outfitters is not the only one guilty of using the term "Navajo". Barney's as well as magazines such as Cosmo, Grazia and Lucky have thrown the word around as well. Most retailers will argue that that the cultural appropriation of these prints is not meant to offend Native Americans, it is simply what is 'trendy' right now.

Clothing stores is not the only place you can see this explosion of Native American prints and style. High Fashion photographers have incorporated these styles into conceptual photoshoots. 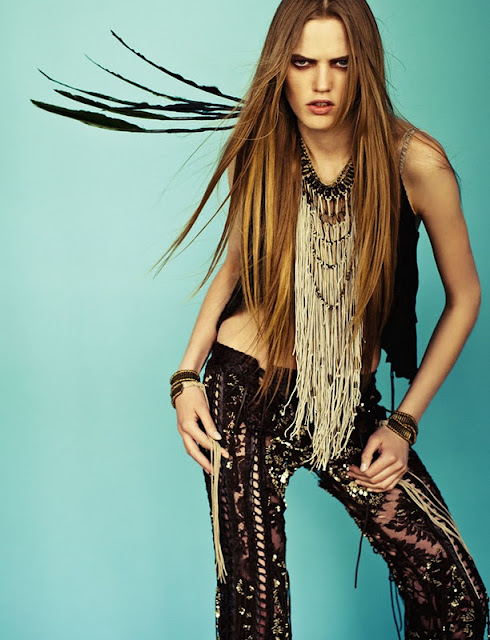