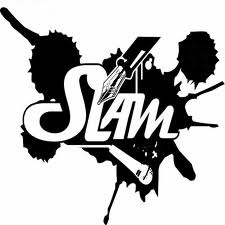 The 90’s saw something weird and rare in the grand-scape of the American underground, a resurgence of poetry.  I should know I was a victim of it.  Along with this new interest came movies chronicling the lives of poets past and present strangely played by the same actor.  As well as new anthologies announcing the new dirtier life of the free verse poet howling the new songs of Whitman’s angry whiskey soaked children still praising the grass so long steam rolled over by asphalt, pleading “rose still!”  Among these new voices to immerge dragging themselves through the negro streets was Slam.


It might seem strange to think of poetry as applicable to the visual arts, but having seen poets listed before in this blog and having woven my life around the 2-D, the 3-D, broken the 4th wall and found the infinite in the 5th I will dispense with anymore explanations and cut right to the nut as it were on this Sabbath.


Slam poetry is visual and vocal performance art employing elements of stage acting, dance, movement, singing, and presences, but none of these things can act to overpower the message and poetics of the poem itself they may only act to enhance the presentation of the work but never be the work itself.  Slam is a competitive form of poetry featuring usually 3 rounds and judged by members of the audience picked at random.  The first slam was started in Chicago by Marc Smith in 1984 and has since grown to have over 80 certified national slam teams across the United States.


Saul Williams is perhaps the United States best know slam poet.  His work is varied dealing with issues of life, race, class, power, politics, basically the gamut of the human animal in relation to the world.  This ethos is exemplified in the poem Coded Language, in which Saul Williams calls for us to awaked and recalibrate our thinking to the fine tuning of our selves:


We claim the present as the pre-sent, as the hereafter.
We are unraveling our navels so that we may ingest the sun.
We are not afraid of the darkness, we trust that the moon shall guide us.
We are determining the future at this very moment.
We now know that the heart is the philosophers' stone
Our music is our alchemy


His use of slam is to say “Yes, we are awake! And the future is ours!”


today we are determined to be the channelers of these changing frequencies
into songs, paintings, writings, dance, drama, photography, carpentry,
crafts, love, and love.
We enlist every instrument: Acoustic, electronic.
Every so-called race, gender, and sexual preference.
Every per-son as beings of sound to acknowledge their responsibility to
uplift the consciousness of the entire fucking World.


He enlists revolutionary tones, words and thought like an angry hippy on the final angst with the first call to wake up and employ your art as you define it to re-imagine your world for the better and take control of consciousness for the effort of letting go.


Saul Williams does not use a lot of humor in his writing he’s rather serious but never to a brow beating fault.  His poetry makes me want to howl from the tallest cliff face I can find and paint my face with mud in the canopies of my reality and laugh out loud with love while listening to sonic youth and truly knowing what that means.


Adult films are populated with these collagen-injected
liposuctioned women
Many of whom have resorted to surgery and self-mutilation
in an attempt to look the way they have been told to look.

Through his clear and precise use of the vulgar in language he makes clear his message and point of a higher consciousness, smart is beautiful, the you of you is better than the you of them, but you better know the name of Luke Skywalker’s home planet for good job security.

Christopher Lee runs both serious poetics as well as humor in his poem Sacrificing.  As an Austin slam poet Christopher (yes I know him) has appeared at the national poetry slam competions.  He makes you laugh about the duality within him and calls into question the nature of being a biracial gay man in the United States approaching the audience with a level of seriousness only masked by his humorous delivery playing with racial and sexual stereo-types:


In this way he asks the audience to look inside themselves at their own contradictions and see what side of the proverbial line they fall or straddle as the case maybe.


This is just a small slice of the great collide-scope of slam poetry and poetry and the art universe.  The voices are as varied as skin tone in the United States with words and song and gesture running up and down the grey scale like Beethoven on the piano.  A lot of slam is social and political commentary, but it doesn’t have to be.  Poetry like any art can be about anything or nothing.  To me the real art of it or anything is to find the pulse of America, feel it like a Ringo Starr beat and find the John and Paul in you to lay texture and vibrant clarity down.  Because it’s not what medium you use but that you use one.  Because that is airwolf.