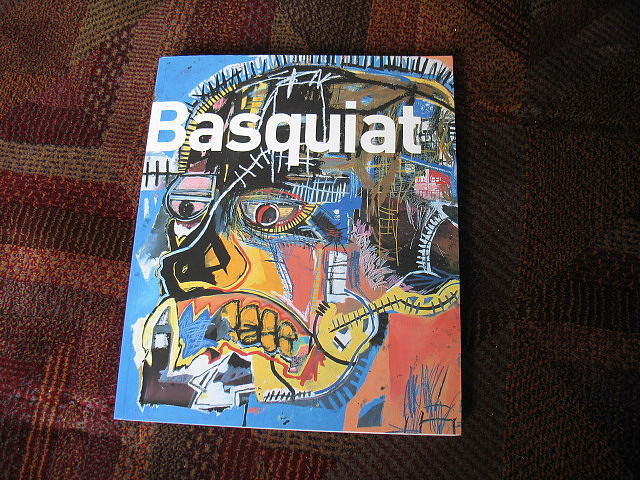 When it came to reviewing a book that addresses contemporary art, ’s Basquiat was an easy choice for me. Published in 2005, the book is a collection of essays about my all-time favorite artist Jean-Michel Basquiat, a Brooklyn-born artist who was only twenty-seven years old when he died. His artistic career lasted only a brief 8 years, and is summarized by the book as “meteoric and often controversial.” Each essay discusses different subjects: Basquiat in history, Basquiat in hip-hop culture, Basquiat’s “defining years,” etc. As childish as this sounds, my absolute favorite thing about the book is the pictures. Printed on thick paper that is undoubtedly as sturdy as it is expensive, the book shows every color and brush stroke in a way that I feel Basquiat would approve of.

One of the most fascinating things about Jean-Michel Basquiat’s work is that he was able to borrow from graffiti and street imagery, cartoons, mythology, and religious symbolism, and create artwork unlike anything done beforehand. I feel like I can relate to his work; all of his paintings and drawings explore issues like race and identity that myself and other young artists struggle with every day. I’ve always felt like Basquiat’s work displays a combination of anger and humor in a way that I’ve never seen, and I was happy to read that many of the knowledegable essayists felt the same way. Contributor Marc Mayer, who I felt was the best writer of the bunch, says of his first time seeing a Jean-Michel Basquiat work: “I could not stop looking at it. Ultimately, I was overcome by a sense that I was standing in front of something emotionally genuine – but I understood little else about it. What this artist was showing me I believed to be a true thing, but also cryptic, evasive, and noisy.” The painting he was viewing was Basquiat’s Notary, and later in the passage he goes on to say, “I like to think that a passion for contemporary art, which would determine my eventual career, grew from this formative experience.”

One of the essays I particularly enjoyed was Fred Hoffman’s “Notes on Five Key Works.” The whole book has hundreds of drawings and paintings by Basquiat, but in this section, I was able to read in-depth opinions & information on specific noteworthy pieces. Hoffman writes that in the early part of 1981, when Basquiat was barely 20 years of age, he went through a defining period in his career. The young artist was “homing in on the possibilities implicit in drawing from his own life experiences as a means of addressing larger human concerns, [and] he produced five key works over an 18-month period.” These pieces were Untitled (Head), Acque Pericolose, Per Capita, Notary, and La Colomba.

Basquiat’s Untitled (Head) depicts an oversized head that is not connected to a human body, but instead floats over a pictorial field. The fact that the image had no precedent in any of Basquiat’s earlier sketches, drawings, or paintings leads us to believe that it was a breakthrough for a young Jean-Michel. Many of Basquiat’s paintings were completed quickly, but Untitled (Head) was begun and then put aside for several months. Hoffman speculates that this is because the “young, unseasoned artist… was caught off guard, possibly even frightened, by the power and energy emanating from this unexpected image.”

Basquiat’s Untitled (Head) caused a magnificent stir in the art world, and it was only enhanced by the exhibition of his Acque Pericolose just a few weeks later. The painting represents the first time the artist took on complex narrative in his subject matter. The work consists of a full-length male nude who is placed midway between a coiled snake and a decomposing cow, and it has been interpreted as Basquiat’s first major self-portrait where “the artist has depicted himself as vulnerable, yet possessed of pride and authority.”

Per Capita is Basquiat’s third major painting from 1981, and it depicts another single black male, this time wearing Everlast boxing shorts. The man depicted in the painting is “positioned halfway between a vaguely defined cityscape and a surrounding pictorial field of abstract atmospheric effects.” Basquiat used political and social commentary throughout his career, and I think he used them as tools to help guide the viewer into deeper truths about himself. In Per Capita, Hoffman writes that Basquiat was revealing his concern for the common man and the daily labor he commits to.

Hoffman writes that La Colomba reveals anguish at this point in the artist’s career. Many feel, including myself, that La Colomba anticipates his eventual demise, and shows aspects of Basquiat’s “personal sense of depletion.” A drool-like substance pouring from the mouth, along with blood-red paint around the face and an arm that seems to be amputated, all seem to point to a state of emotional suffering that had engulfed Basquiat.