REVIEW | NCFE Handbook to Understanding, Preparing for, and Responding to Challenges to Your Freedom of Artistic Expression, National Campaign for Freedom of Expression, 1998 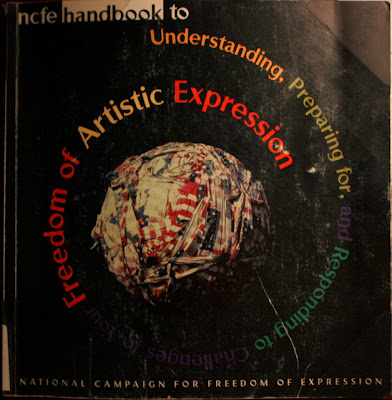 "Freedom of artistic expression is the principle that an artist should be unrestrained by law or convention in the making of his or her art. Artistic freedom is vital to both the cultural and political health of our society. It is essential in a democracy that values and protects the rights of individual to espouse his or her beliefs."


Inspired by the censorship of art considered offensive for whatever reasons throughout the country the NCFE and this book was created to be an instruction manual for individual artists and organizations who would otherwise be left to fight for their ignored constitutional right to free speech alone. Although it was written in 1998 by the National Campaign for Freedom (which ceased to exist in 2000), it is still very relevant in today's art world because there has always been and will always be people trying to stifle artistic creation that is "obscene, seditious, immoral or offensive". It is very easy for me to blame a very specific type of homophobic bible thumpin' conservative prude but, which adds to it's credibility, this book doesn't share my bias,


"Most of the well-known national organizations, such as the Christian Coalition, the American Family Association, and the Focus on the Family Organization, have local chapters that may actively monitor art in your community. Some conservative church and parents organizations may also devote energy and financial resources to challenging artistic freedom. But such challenges do not originate exclusively from the right side of the political spectrum. Some organizations and individuals identifying with the left are also active proponents of restraint on artistic freedom."

The author's (listed as the NCFE) refer to these attacks as "challenges to freedom". It is important to note the clarification made in the book about the difference between a challenge and an artistic decision although it isn't always clear which is taking place. A challenge on freedom is not when a curator chooses not to show something because they don't think the artistic quality is worthy of being presented but when the art professional excludes the work strictly due to content or meaning.
The book is split into three sections; understanding, preparing and responding. Each section has examples of specific challenges and exact instructions to help the read handle them while protecting their right as an artist.
The Understanding section dissects the ways in which these challenges arise. Boycotts, protests and the censorship by governmental officials are all mentioned but I found most interesting the breach of an exhibition contract. This section discusses an issue that is still relevant even a decade after the book was published. The controversy at the Smithsonian last year over David Wojnarowicz's video, Fire in My Belly is a sad example of this type of challenge to artistic freedom of expression. The outraged response and rallying of the art community in opposition of the Smithsonian's decision to remove the video is in itself an inspiring example of people not standing for anyone's right to the first amendment being taken away.
Another issue I found interesting in the Understanding section was child pornography. Many fine art photographers have been charged with and even arrested on charges dealing with exploitation of minors. In 1994 a photographer and art professor at Wayne State University, Marilyn Zimmerman, was investigated for child pornography charges after throwing away prints of his three year old daughter naked in the bathtub. After receiving many letters in support of the professor the charges were dropped. This issue is very tricky because the question of exploitation is on the intentions of the photographer, which is hard to know. It is the right of the artist to have freedom of expression but it is also the right of the minor to be protected from something harmful like child pornography. Few of the other instances of censorship mentioned are as hard to side on as exploitation of a child. For example, an artist having to remove a sculpture from her backyard because part of it was visible from the sidewalk and people didn't like to look at it.
The book lists the following: nudity, homosexuality, blasphemy, witchcraft, violence, law enforcement criticisms and race, as being the most frequently challenged subjects in art. I see this assessment as still true today. So how do we overcome the challenges? We prepare for them in advance, says the manual. In the Preparing section there are several practical applications like forming a local group that supports the right to freedom of speech. There is great power in numbers. When an issue does arise an artist will have support from his or her community.


"Standing up against one challenge may discourage future challenges and discourage artists from self censoring."

The last section of the book, Responding, doesn't sugar coat how difficult taking a stand against violations against the first amendment can be. Fighting back can be physically and emotionally exhausting, a financial burden and can last for years. But with the tools and step by step directions given to the reader it is extremely possible and necessary to ensure that every generation of artists will not only have the right to freedom of expression but also feel free and safe to create! Censorship is a slippery slope that could lead the destruction of piece of society where saying anything you want is possible. Art is beautiful because it has the power to break boundaries, open minds and show people a side of the world they couldn't discover on their own. That is something we can't ever afford to lose.