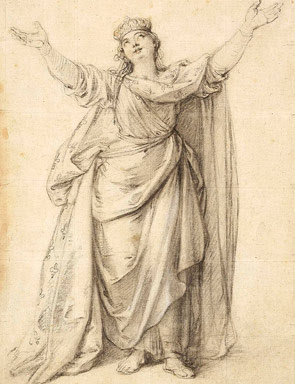 Amongst the grand European paintings and the eccentric neighboring hall of contemporary art, guarded by the roman busts of warriors and thinkers, there lies the collection, Storied Past: Four Centuries of French Drawings from the BlantonMuseum of Art, shown September 18- December 31, 2011.
The walls are adorned with intricate lines and sketches of the fifty-eight French drawings done in their academies, the best of the best in their time between the sixteenth through the nineteenth centuries. Some of the artists include Jacques Callot, François Boucher, Jean-Baptiste Greuze, Théodore Rousseau, Jean-Louis Forain, and Théophile Alexandre Steinlen.

The works in the exhibit display works completed from a time in which the Académie royale de peinture et de sculpture (Royal Academy of Painting and Sculpture) dominated the artistic and cultural scene in as well as . In 1666 its location in Rome opened the door for art students to study abroad in Italy at Académie de France (French Academy) and they then transferred their focus on the technical aspects of art to the expression and emotional.  The content of these images focus more on the everyday life and realistic perspective rather than the religious and heroic scenes of the earlier genres.

The drawings are rather similar in their demeanor; some would say that they even become repetitive.  However upon closer inspection, despite their repetition, they are beautiful and delicate, both in their canvases and aged paper as well as their inked lines.  These works are placed in the hushed halls on the second floor of the Blanton against light blue walls that mimic the quiet tranquility of the works subjects.  It is obvious that this venue was chosen for its ability for reflection and study of the works at hand.

In the middle of one of the rooms adorned with these fairy-like pen strokes, was a circular table with five sketches behind glass accompanied by five magnifying glasses available for the viewer to take a closer look at the work.  It allowed for an even closer look at the intricate lines that the wall view does not allow.  A unique privilege in viewing, this made me feel like an art historian myself, examining these dainty creations and studying them.  On the same table there is a catalog with essays by Cheryl Snay (curator of European art, Snite Museum of Art), Johnathan Bober (curator and head of the department of old master prints, National Gallery of Art), and Kenneth Grant (paper conservator at the Harry Ransom Center).

These little works of art that have made a rather grand impact, are a nice change and a gorgeous edition to the Blanton.  The delicate strokes that are full of emotion in their smaller canvases are truly remarkable in how much they convey in their limited size.

by Veronica Villanueva
at 9:00 AM